Remember, remember the Vth of November! That “V” stands for 5. “V” also stands for Vendetta.

Now, when one letter is used to represent a word for the sake of shortening it, we call that abbreviation1. The letter itself is called an initial. And when you place initials in a string and read them as such? That is an initialism. Some common examples in English include ATM, CSI, LGBTQ, WTF, and TGIF. So that’s [tʰi.dʒi.aɪ.ɛf], not [tʰə.ˈgɪf].

The OED (there’s another!) categorizes initialisms as a subset of the more commonly-known acronyms. On the other hand, some people insist that the two are mutually exclusive: initialisms are read as strings of letters, but acronyms are pronounced as the word they form. This doesn’t work for all abbreviations, of course: “html” is near-impossible to read aloud. ([hɪt.məl]? [hʌtm̩l̩]?) But many acronyms are formed serendipitously enough that they easily follow the phonotactic rules of English: NASA, GEICO, FOMO, Tribeca, and one of my recent favorites, conlang2. Some acronyms have been around for so long or used so often that people have forgotten that they stand for something longer (e.g., radar, laser, snafu).

And what do we call abbreviations that are pronounced as a combination of letters and words, like MCAT or SFMOMA? Or the abbreviations that can be either, depending on the speaker? How do you say LOL ([lɔɫ] or [ɛɫ.oʊ.ɛɫ]) and ASAP ([ˈeɪ.sæp] or [eɪ.ɛs.eɪ.ˈpʰi])? What about initialisms that use the ampersand symbol &3 (which, technically, is not an initial)? Well, it seems no one has come to a consensus on any of these.

Before I veer too far into who-really-cares territory, let me bring it back to acronyms, and to a very relevant one for this month: Nanowrimo! That’s short for National Novel Writing Month; it’s an international creative writing pursuit in which ambitious writers attempt to pen a novel of 50,000 words in just thirty days. Last Saturday saw the fresh beginnings of thousands of new stories, characters, and worlds; their creators will write feverishly for the next four weeks. Alas, I am not among them this year. I “won” Nanowrimo once — in a sense — two years ago, when I co-wrote a multiple-viewpoint novel with my friend Sara. She wrote half of the story from her character’s perspective, and I wrote the other half from my character’s perspective, and occasionally the two characters would cross paths. Together, we made it past the finish line.

But this year, I find myself far too busy to write two thousand words a day of setting, characterization, and plot. That’s twice the length of this post, written seven times a week instead of one. As it is, I can barely keep up with my daily schoolwork and various end-of-term projects. (I’ve always wished that Nanowrimo were in July.) Are you doing Nanowrimo? Let me know if you are, and I’ll cheer you on from the sidelines!

While we’re on the subject of books, I also want to talk about one that was recently published by my friend Eleanor. It’s a thrilling young adult fantasy called Sparkers, and I loved it because it has music and magic (of a very different sort from Harry Potter, more like the hand seals from Naruto, now that I think of it). There are also smatterings of linguistics all throughout: sign language! translation! typology! The story is rather dark: it’s set in a society with a clear social hierarchy and a brutally oppressive ruling class. Also, the plot revolves around a mysterious plague that befalls the city. Lots of people die. The book was gripping; I tried to pace my reading over a few days, but it quickly became difficult to put down.

The scenes in which the main characters have to decode an ancient language were among my favorites, since they reminded me of the classes I took in translation of Biblical Hebrew. It was in fact thanks to this class that I was able to aid Eleanor with some place and character names in Sparkers, because the language of the world she created is based on Hebrew. Well, if I can’t write my own novel, I am at least proud to have contributed in a small way to somebody else’s. 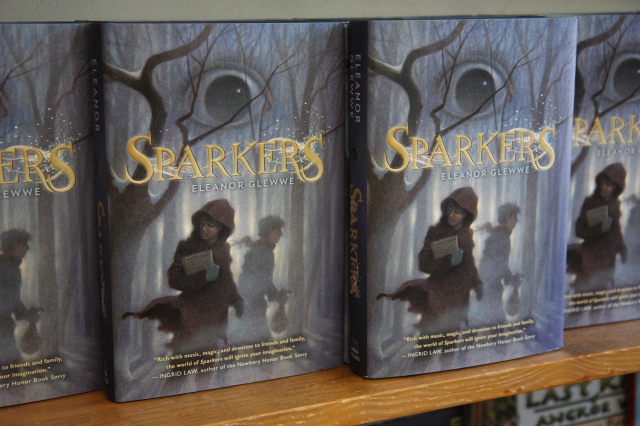 This is what “Sparkers” looks like. Now that you know, find it at your local bookstore! Read it! Write a rave review!

Finally, I’ve added a new page to this blog: “Bookworm” will be a continually-updated list of books I have read for pleasure since beginning graduate school. In six years’ time, it will hopefully be very, very long.

What are you reading these days?

Word of the Day: backronym, a portmanteau of backward and acronym, which refers to an acronym that was constructed specifically so that the words would fit the letters, rather than the other way around. Student organizations are particularly adept at making neat backronyms. At Berkeley, we have the LEAD (Leadership, Engagement, Advising, Development) Center for… you guessed it: future leaders. The vociferous and near-militant  workers’ rights group at my undergraduate institution named themselves the Swarthmore Labor Action Project, or SLAP. You’ve got to hand it to the punny types who can create backronyms that change meanings (e.g. BMW = “Break My Wallet”, PhD = “Poor, Hungry, and Desperate) or even for words that aren’t acronyms to begin with, like “Basic Instructions Before Leaving Earth” for Bible or “Save Our Souls” for SOS.

1This is a simplified definition; abbreviation actually means any kind of shortening, not just of words, and not just to initial letters (e.g., abbrev. is an abbreviation for abbreviation).
2Although this one, along with words like hazmat and , comes close to the category of portmanteaus, which are new words formed a blend of two others. Note that while brunch is clearly breakfast+lunch, it cannot be replaced with its constituents. (i.e. “I love going to Black Bear Diner for breakfast lunch on Sundays.” Huh?)
3Ampersand has a neat little history which you can read about here. Its name is the result of a mondegreen! I like the symbol because I can use it abbreviate my own name. The design world likes obsesses over the symbol for reasons unbeknownst to man.